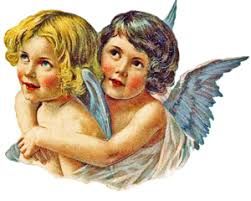 Winged Angels Appearing as Women?
Q: In researching Angels I find that the majoriy picture them as females, or women with wings.  In almost every book on angels I find this is the case.  What have you found in the Bible to support this?
A: There are no female depiction of Angels in the Bible.  The idea that Angelic beings appear as women is from the imaginations of men, or, well, the enemy of Heaven.  When Angels make an appearance they appear in a male or masculine form.  The truth is, when not in their actual glory, they can appear as human.  It is not that they appear as us but that we appear as them or as they look.  In their glory, however, they are might beings, appearing to overwhelm the physical senses to the point they can be mistaken for a god.  Here are a few examples.

(Heb 13:2)  Don't forget to show hospitality to strangers, for in doing so, some have entertained angels without knowing it.

Col 2:18  Let no one rob you of your prize by a voluntary (false) humility and worshipping of the angels, dwelling in the things which he (or she) has not seen, vainly puffed up by his (or her) fleshly mind ...
(Mat 22:29)  But YaHshua answered them, "You are mistaken, not knowing the Scriptures, nor the power of the FATHER.
(Mat 22:30)  For in the resurrection they neither marry, nor are given in marriage, but are like the FATHER's angels in heaven.
Gal 3:28  There is neither Jew nor Greek, slave nor free, male nor female, for you are all one in the Anointed YaHshua.
(2Co 11:13)  For such men are false apostles, deceitful workers, masquerading as the messiah's apostles.
(2Co 11:14)  And no wonder, for even Satan masquerades as an angel of light.
(2Co 11:15)  It is no great thing therefore if his servants also masquerade as servants of righteousness, whose end will be according to their works.

In the following reveal we see, by His Word, winged Angels.  Nothing like what is presented in this pagan world:

(Isa 6:1)  In the year that king Uzziah died, I saw the Lord sitting on a throne, high and lifted up; and His train filled the temple.
(Isa 6:2)  Above Him stood the seraphim (Angels). Each one had six wings. With two he covered his face. With two he covered his feet. With two he flew.
(Isa 6:3)  One called to another, and said, "Holy, holy, holy, is YaHWeH of Armies! The whole earth is full of His Glory!"
(Isa 6:4)  The foundations of the thresholds shook at the voice of him who called, and the house was filled with smoke.

We are not to worship Angels, not even if one were to appear to us in His Glory, for they are servants, as are we, in this present state.

More couls be written about this but I believe the question has been answered.  Angels do not appear as women with wings and they certainly do not appear a children with wings, nor do they appear as babies.  Angels are might beings, but not to be worshiped, they are not gods but angels in the service of their Creator, as are we, in this moment in time.  They are ministering spirits.

(Heb 1:14)  Aren't they all serving (minstering) spirits, sent out to do service for the sake of those who will inherit salvation?

Make no mistake, however, Angels from Heaven are powerful beings and should not be trifled with.  They have a job to do and looking at the conditions of the earth and the people on it, they have their hands full.  Still, even though they are presently more than we are, we are those of the inheritance, destined to be come as YaHshua is.

(1Jn 3:2)  Beloved, now we are children of the FATHER, and it is not yet revealed what we will be. But we know that, when He is revealed, we will be like Him; for we will see Him just as He is.

(1Jn 3:3)  Everyone who has this hope set on him purifies himself, even as He is pure.

What a revelation that is.  Read it again -- we are purified, not by our actions, but by and through our belief in Him and who He is, someone whom we are to become like.  Too simple for some, I know, but true, nonetheless.

(Php 3:20)  For our citizenship is in heaven, from where we also wait for a Savior, the Lord YaHshua the messiah;
(Php 3:21)  who will change the body of our humiliation to be conformed to the body of His Glory, according to the working by which He is able even to subject all things to Himself.

We are distined to become like Him, not angels, but like Him, raised into the Holy Spirit of our Heavenly Father, to be His children.  Even though we are lower than the Angels, for now, we are destined to inherit the Kingdom of our Heavenly Father.
The Bible has a lot to say about Angels, of course.  We are not to worship them.  They are ministering Spirits, or servants, in service to their Creator and to over see those called to be the brothers and sisters of YaHshua, the Children YaH, our Heavenly Father.  The least of them, at the present time, are more powerful than the strongest of any in the flesh -- as we of the flesh await our quickening, our resurrection and rebirth from this physical body to our Spiritual one, like that of YaHshua, our brother and Savior.  No wings -- only in the imaginations of the pagan and rebel minds of men and women.

(Rom 4:17)  (As it is written, I have made you [Abraham] a father of many nations,) before him whom he believed, even God, who quickens the dead, and calleth those things which be not as though they were.

(1Pe 3:18)  For the Christ also has once suffered for sins, the just for the unjust, that He might bring us to God, being put to death in the flesh, but quickened by the Spirit:

(John 5:21)  For as the Father raises up the dead, and quickens them; even so the Son quickens whom He will.

(John 5:22)  For the Father judges no man, but has committed all judgment to the Son:

Also, consider the following -- Angels are not "know it alls" -- the things revealed to the prophets (teachers) of old, passed down to us by His Holy Spirit, the Spirit of our Savior, in them would be revealed and passed down to those called, were things that even the Angels of Heaven wanted to see and look into, but it was and has been given to us, that is, those of us still in the flesh -- revealed to those called first, even though we are lower than the angels, our destiny it to be like that or our Lord and Savior, YaHshua, to be a Child of the Living God and Father, YaH.

1Pe 1:10  Concerning this salvation, the prophets sought and searched diligently, who prophesied of the grace that would come to you,
1Pe 1:11  searching for who or what kind of time the Spirit of the messiah, which was in them, pointed to, when he predicted the sufferings of the messiah, and the glories that would follow them.
1Pe 1:12  To them it was revealed, that not to themselves, but to you, they ministered these things, which now have been announced to you through those who preached the Good News to you by the Holy Spirit sent out from heaven; which things angels desire to look into.

Notice, it is not desired to look into, but desire to look into -- a continuing revelation and revelations by the understanding of His Prophetic word.  First about our Savior, YaHshua, and about those becoming His brothers and sisters, and now about what is to come ... not one word will pass from the written revelations until all is fulfilled.  Just as our Lord YaHshua told us that not one jot would pass from what has been revealed in the written Word, so long as the present Heaven and Earth exist.  A time is coming when this will be finished, when the New Heaven and New Earth are created and the Old are finished.  Until then, we have the revelations, the literal recorded words of our Creator to consider, today, tomorrow and to the end, His words, recorded by men, proving His existence and His control as the Cause of Everything and the Sustainer of Everything and as the Father of not only YaHshua, His First Born, but us as well -- HalleluYaH.
Once again, Removing the Fog of Religion
Back to content