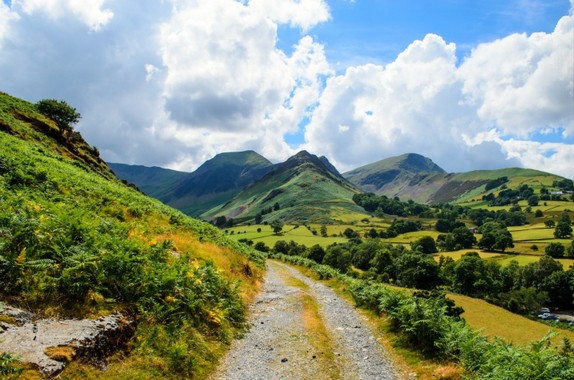 Narrow is the way -- Few that find it
Many are called -- But Few Find It?
Matthew 7:13-14
By Dan L Baxley
email -- servant@servantsofyahshua.com
Removing The Fog of Religion
Many hear and listen and chase after the Wisdoms -- mostly the Wisdoms of the world.  Many hear the message, or have heard the message but like oil poured over the hands, it slides right through the fingers -- it feels good, for the moment but only a thin film is left behind and then, eventually, it is gone.
Our Lord YaHshua, told us that there are two ways, or choices that we have, only two -- He said  that broad is the Way leading to destruction and narrow is the way  and few that find it --

A Choice, or a Calling, or both?  The Narrow gate, and Few that find it.  That means that there are those looking for it -- looking -- searching for that narrow gate -- that door that leads to life.

(Mat 7:7)  Ask and it will be given to you; seek and you will find; knock and the door will be opened to you.

(Mat 7:8)  For everyone who asks receives; he who seeks finds; and to him who knocks, the door will be opened. NIV
(Luke 13:24)  Make every effort to enter through the narrow door, because many, I tell you, will try to enter and will not be able to. NIV

Mixed signals?  Yes, this can be understood.  First, let's consider something revealed by a parable YaHshua told His disciples.  They would understand this, but only later, much later.  We have the benefit of history -- a minor search for what happened to the First Century Church (Ecclesia), the sheep were certainly scattered.

(John 10:6)  YaHshua spoke this parable to them, but they didn't understand what he was telling them.

(John 10:7)  YaHshua therefore said to them again, "Most certainly, I tell you, I am the sheep's door.
(John 10:8)  All who came before Me are thieves and robbers, but the sheep didn't listen to them.
(John 10:9)  I am the door. If anyone enters in by Me, he will be saved, and will go in and go out, and will find pasture.
(John 10:10)  The thief only comes to steal, kill, and destroy. I came that they may have life, and may have it abundantly.
(John 10:11)  I am the good shepherd. The good shepherd lays down his life for the sheep.

Again -- mixed signals?  You bet, one for encouragement and another to discourage -- Matthew, first encrouges (verses 7:7-8), then discourages (7:13-14), and along comes Luke and gives a real positive, affirmation that not very many will get in.  You pick, it is your choice, and in that choice you will find the answer to this conflicting statements from our Lord YaHshua.  How can both be true?  If it is a calling, well, then you have to make a choice -- it is like being awakened and suddenly you have the answer to everything -- YaHshua, He is the answer to all of the problems this world has never been able to solve and in the process He is the answer saving mankind from itself and from the clutches of the Devil, the one we call Satan.  Then in becomes your responsibility to answer that calling and your journey begins.  But, you must take action and never, never, give up, no matter the challenges that lay in front of you -- to answer the calling is to confess Him as your Savior, to repent and seek baptism and never, never quit searching the word for guidance and growth.
On the other hand, if you are a seeker, one who is constantly looking for the truth and for the God of everything, the answer to this world's problems and why evil is evil?  Why does a God of all Creation allow evil to exist.  Seek and you will find, that is what He said.  Some have become seekers in order to disprove the Bible or that there is a God, much less a Savior, only to find themselves awakened and in the spirit of repentance.  No matter which way, to end up in the narrow way or to be knocking on that Door, it is a choice you  and only you can make.  Once you make that choice you must never, that is never ever, turn you crown over to another, never turn the responsibility for your Salvation over to another person, only YaHshua can save you for eternity.   Once you pass through the Door -- YaHshua -- you become part or one in the flock He shepherds.  But notice, the wolves that have had nearly 2,000 years to attack and maul the flock, causes and has caused the flock to be scattered.  But, He knows each one of us, no matter were we may be, and like salt of the earth, we are scattered.

John 10:13  The hired hand flees because he is a hired hand, and doesn't care for the sheep.

Ask yourself, which Way or Path do you see the world on?  The Broad way, or the Narrow way?  Do you see any of the religions on the right path?  Which if any, are following the narrow path, or entering by the narrow gate?  Among the Christian religions, they all claim that the Door is JESUS, a name pronounced as HeyZeus.
Believe it or not, most of the populations of the world believe in a supreme being of some kind, most of the world's populations are steeped in a religion of some sort.  Christianity and Islam being two of the biggest, numbering in the billions, not to mention all of the various religions and religious following out of the Asian or Eastern countries -- yes, broad is the way.  There is, however, a narrow, or restricted way that actually leads to life eternal.  If we see this, it would be reasonable, then, to assume that the masses of people in all of the various religions around the world are on that "broad way", the one that leads to destruciton.
Few that find it, that is, that find the narrow way.  This is mostly true for those looking or making some effort to look, or seek out that Way that leads to life and still, it is only the Few that find it.  Not according to me, but according to the One Savior the greates Prophet of all time, YaHshua.  Not only did He give His disciples a time line -- Matthew 24 -- but He later sent and Angel (Messenger) to His Apostle John and through word and vision He gave a much more detail account for what is to come.  And, when we look back at the Prophets of old, those preserved in the Hebrew writings, we confirmation for events to take place just before our Messiah, our Savior YaHshua returns to restore those things that need to be restored and to stop Satan and men on a path to total destruction -- to save what is left when sin and the self worship of men and women has run its course -- Matthew 24:22.
There are so many religious books, books classified by various religions as Sacred or Holy.  But, only one offers the forgiveness of all sin and promises salvation, by and through One and only One Savior, who his pledged to deliver all who call on and confess Him and are baptised into His name and escape from the Second Death -- Heb 9:27, Rev 2:11; 20:6, 14 -- and will received a new Body, fit for Eternity -- John 5:21, 1John 3:2.  Some, most, offer up a vision into eternity that is pretty much terrible and something I cannot imagine anyone would want. In the Christian religion, for example, there is a teaching that followers of their fake JESUS (Pronounced as Hey Zeus) Paradise, called Heaven, taught by the ministers and pastors and many others claiming to be Christian Preachers, Priests and Pastors. The Book we call the Bible, is judged and condemned all day long by the doctrinal teachings of the different houses of Christian religion.  The Book is judged by the actions of those claiming to be followers of the Book.  The Book is understood by very few who claim to be followers of the Book.
The Book we call the Hebrew/Christian Bible, is the collected writings, preserved for us by the Hebrews/Jews/Christian scholars and priests, scribes and Laywers -- they all recognize this book as a communication between man and their Creator.  The inspired writings being recognized as inspired and then captured, first on stone, then other method, down to the white pages of written words we have today -- all copies of copies, and that is where the miracle and proof of inspiration comes from.  The guide, the wisdom, the intellect is so apparent that to suggest that men did anything other than make copies is ludicrous.  The writings, from historical, to prophetic are the most astounding in all of human history.  And yet, still, those claiming to be believers continue to refuse the one who could actually save them.  It is hard, and for some, impossible to admit how wrong or brain washed they are or have become.  We all like to fancy ourselves as free thinkers, but all you have to do is look at the nightly new and you see the minds of young and old being manipulated -- never make the mistake in thinking that that is them, not you, that you are immune to deception -- never make that mistake and be continually on your gaurd.
Now, let's take a look at what the Prophetic word has to say about those who think they are believers, who think they cannot possibly be fooled or tricked or deceived into confessing or calling on or worshiping in a false name.
Removing the Fog of Religion
email:  servant@servantsofyahshua.com
Back to content