This is the term they want you to use as a name. This is the same reasoning those say “Lord” is His Name, or “God” is His name. These are terms that demand you answer the question, “Which God is your God, which Lord is your Lord”? In the case of the term “salvation” this does not work so good, “salvation” is from someone, or “yeshua” is from someone, it is not someone. YaHshua is to say, YaH is my yeshua, but we are more comfortable saying, YaH is my Salvation. Not to belabor the point, but all the same, YaHshuameans, YaH is Salvation, but yeshua means only salvation. You could write, YaH is “yeshua” and be correct because that is what He is.

In the following article you will see examples of this faulty reasoning based on a faulty premise, that Yeshua is the correct name and all others are wrong. This author of what follows is actually attempting to show that the Aramaic inherited from the time of Mohammad is in error, and the complete article (I will post later) goes on in an attempt to prove that the bogus name JESUS is actually correct, as a result of the evolution of languages. For now I want to present this material as a visual. The flip side of the coin, you might say, and a very detailed coin it is, but I would like for you to notice, in every example given by the article below, it is just as I have said; the complete Name in the Hebrew contain His Name YaH (YH) while the Arab Aramaic does not. That is the argument for using “Yeshua” that it is the Aramaic of our Savior’s Name and this is the language the Apostles spoke. We find in Acts 21:40 Paul address his people in Hebrew and in Acts 26:14 our Savior addressed Paul in the Hebrew tongue – what happened to the Aramaic? Also the Aramaic of then is not the Arabic Aramaic of now. YaHshua identified Himself to Paul as YaHshua, or perhaps, YaHoshua, but not as “yeshua”. I hope you find what follows interesting and informative. 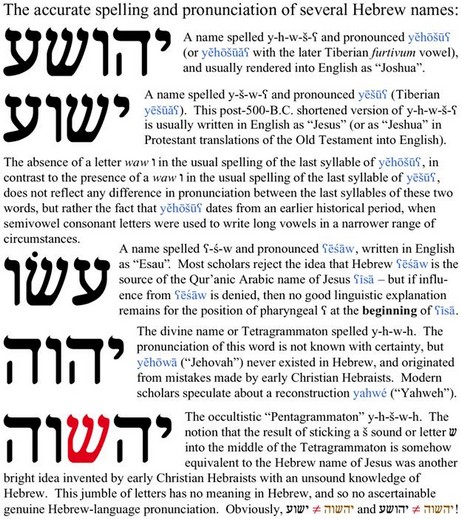 This example above is not my study. I found it really interesting and I hope you do too. You can visualize the Hebrew lettering, reading from right to left; you see the Y and the H in the Hebrew characters plainly. Keep in mind the letters “e” and “a” are vowels to aid in the pronunciation and are not part of the Name (The Shem). In the example above the author uses the “e” vowel and what most do not realize is this “e” is a “long e”, or “ee” in pronunciation (phonetically) is nearly identical to the same phonetic sound as the “a”. Technically, those using the “e” should present it as “ee”, called the "long e", but that looks too weird so they let the reader think it is the “short e”, or they just do not know.
Okay, the “e” out of the way (joking) the article is dealing with how His Name is used in Aramaic and how they screw it up. Armed with your thinking cap and guided by the Spirit I do pray you can see this clearly – the arguments among the Sacred Names groups and some Hebrew/Jewish groups is not really over His Name, that seems to be hidden from them in plain sight, but they argue over letters not even found in His Name and over letters added and in one outstanding case, a letter of His Name removed, as in the name, Y’shua, or Yeshua, or Yeshu.
As more and more Christians wake up to this truth and begin to look for His birth Name we see the popularity of His Name written as, Yeshua coming into vogue. Many times the believer will hear a teacher, preacher or prophet using both the name, JESUS and Yeshua interchangeably. While this is so much better and is moving you and others toward the truth the replacing of the bogus name JESUS completely is still a problem for the truth seeker and the name Yeshua falls short too (pun intended). Some say this form, Yeshua, is the short form – not!
Yeshua is only part of the name -- a major letter has been dropped, effectively cutting the Name of our Creator God in half. In the title of this article you will notice the two primary Names for the God of the Old Testament and the God of the New Testament both contain the transliteration from the Hebrew letter to the English, “H”, while the Judaized and Christianized, Yeshua, or Y’shua, have dropped the “H” completely. I have read nearly every argument there is about why we should be using the name, Yeshua, instead of YaHshua and always come away with a bad taste, longing for the day we will be given a pure language putting an end all of this nonsense (Zep 3:9). Oh, and then there are those that claim YaHshua should be spelled, YaHushua.
Strong’s Hebrew Dictionary and Baker’s Complete Word Study -- when looking up the Old English transliteration, Joshua -- has it, Yahoshua. It seems the “o” and the “u” are to be pronounced the same? They say you cannot find the name, YaHshua, in the OT so we should use, Yeshua?  Yes, use the name Yeshua, with both a missing H and the mission O letters? What is the logic behind this?  Sounds like some kind of conspiracy to me.  Their faulty logic is due to the fact that they cannot connect the false name JESUS with any Scriptural reference, so these scholars need to find something in the Old Covenant writings that they can connect to, even if it means telling the lie.  You see, the name Yeshua is found in the Old Teastament, as a name, some 30 times and as the term salvation some 90 times. Then they have to make the leap saying that Yeshua is the same as the Greek JESUS.  The Crazy thing is that the bogus name JESUS is not Greek.  Also, if they are really serious about this then why not replace every occurrence for the fake name JESUS with the more correct, according to them, Yeshua?  If we have this Name, Yeshua, then why are they continuing to use the name that has only existed for about 400 years?  That is, if Yeshua is His Name?  Yeshua is correct but YaHshua is not?  Look at the examples in the above presentation, you will find no letter or character for the “u” or the “o” these are supplied by the translators, whomever that may be, or the reader, whomever that may be. It would be a matter of choice, and not part of His Name.  The translators have chosen to put this letter in just as they use vowels, all letters that are not part of His Name, but only used as aides to pronounce.  This must be understood, just because a translator inserts a letter does not a new name make.
Clearly, if the name they claim, Yeshua, is the Aramaic (Arabic) and has dropped the “H” character as has the Jewish version of this same, shortened, name, the neither is correct, they are all wrong. Yeshua is not correct, and is not fully His Birth Name -- even so, the Christians replace even this name with another, completely different name. If you want a short version then go with, Yehu, or YaHu, as seen in some personal names such as Netanyahu, the current Prime Minister of Israel. YaH is also called the short form of YaHWeh, and this Name is found in the Bible -- Ps 68:4.  No U and not O and it is absolutely a form that is correct to use, and it has nothing in common with the bogus name JESUS.  I pray this has helped you, I know it has me.
www.servantsofyahshua.com email: dan@servantsofyahshua.com